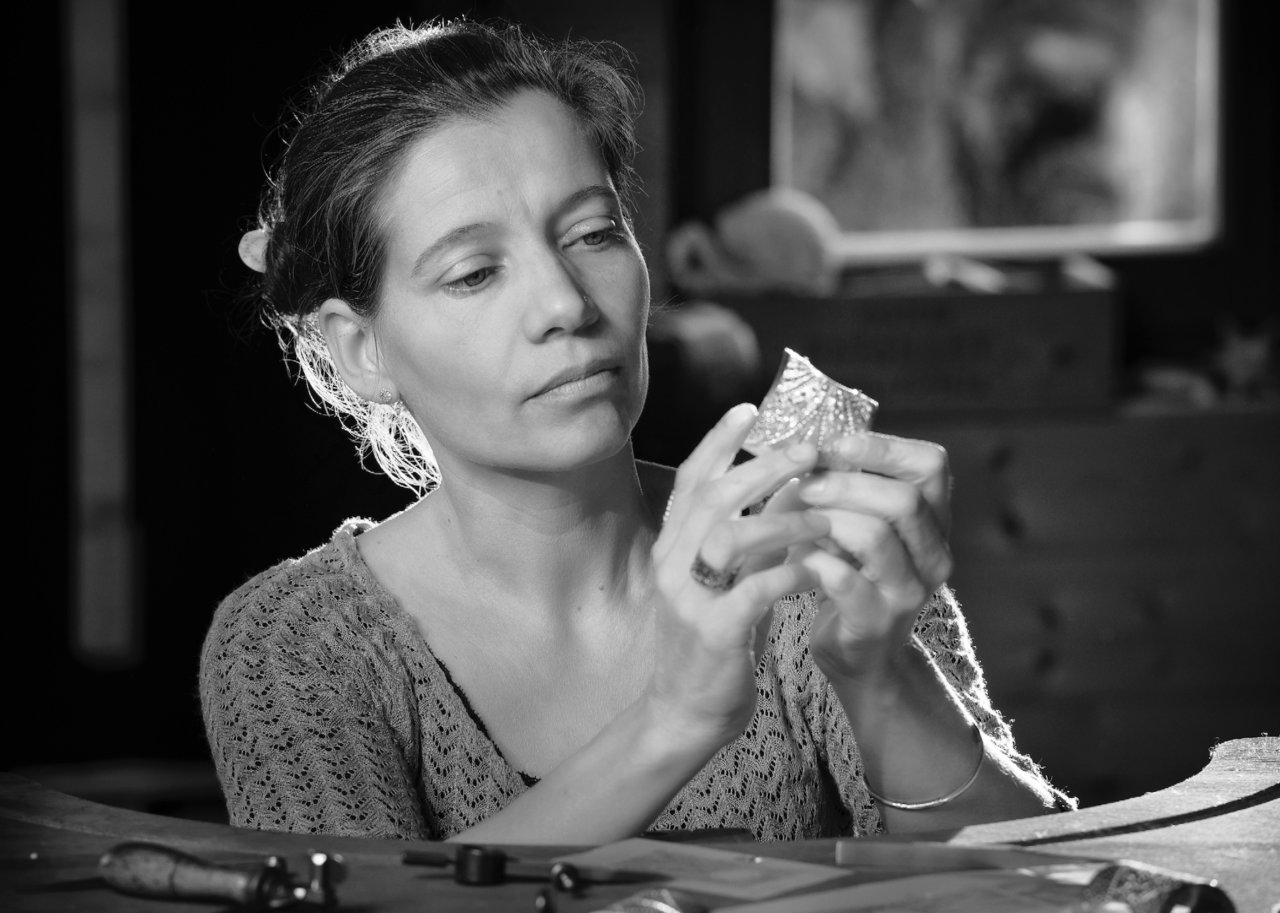 Sara Bran is an alchemist of gold. From her work she brings out the greatest fragility of gold and its powerful beauty. Each piece of jewelry is worked with a multitude of details, hidden messages, or decorated with precious stones. Sara worked for the Maisons de la Place Vendôme among other things, but it was during her exhibition “Sara Bran The Gold of Secrets” at the Secq des Tournelles Museum in Rouen that we met her. In this 15th century church, now a museum, in the midst of spectacular and fascinating pieces of ironwork, Sara Bran tells us about her work, her research to offer excellence in gesture, and her exhibition “Sara Bran The Gold of Secrets” which is in evident communion with the works of the craftsmen from previous centuries found in the Museum.

Maison Sensey : How did it begin?

Sara Bran : It started with sculpture. I was a stone sculptor and I painted. I had a strong interest in the decorative object and especially in the adornment of the body with jewelry. One day I broke a small piece of sculpture and turned it into a piece of jewelry. It started like that!

After this first piece, I made another, and so on. During an exhibition, I was presenting a few pieces and a gallery owner ordered me a collection. From there followed several collections. The first pieces were very sculptural and mostly made of organic materials, precious woods, fossil ivory, semi-precious colored stones. For all this to be worn, I needed more technical notions in jewelry.

I went to see a jeweler friend, to learn the basics of jewelry bijouterie, including precious metal work. Jewelry became more and more important to me. When I started to learn manual cutting with the saw bocfil, I realized that there was much to do at the ornamental level, with plays on shade, finesse, details. It fascinated me.

Later, I embarked on much more experimental creations and further research. That’s when I met textile lace makers. I realized that we had similarities in patterns, ornamentations. I started to look at their ornamental repertoire. This led me to do research in Portugal for two years giving birth to my first collection “The Gold of Time“.

I collected textile lace patterns and I reinterpreted some in gold or silver. I did some research to come up with something that was not possible then; to find both the finesse and flexibility of textile lace work. I needed to forge the metals, to form, to work very thin thicknesses. I wanted to find this flexibility and lightness of the textile, which by definition is not present in the metal. It took years of research on alloys, implementation, forging and construction.

At the same time, I elaborated what became my creative alphabet. I started by collecting textile lace patterns. I reinterpreted them to adapt them to the material and I began to draw my own motifs on gold. Gold is worked by removal of material, by cutting, while with textiles lace makers make nodes or frames. My approach is different, but I manage to make points that they make and integrate this in my creations, so essentially, I can combine their alphabet and mine.

Lacemaker on gold is a job that does not exist. How do you define your job?

I needed a job, so I invented one. I have a strong drawing base. I did a lot of painting and stone carving, which also gives me a good base in three-dimensional work. I then integrated some of the basics of jeweler’s craft to achieve a level of execution and finishing found in Haute Joaillerie. I am usually classified in Haute Joaillerie because I also work for the famous houses of the Place Vendôme, even though I do not exactly make jewelry!

I just put diamonds in my lace; I create a piece in precious metal in which there are precious stones, or diamonds. I do a lot of private orders, custom creations such as wedding rings. I integrate custom patterns, it is state-of-the-art custom tailoring, because I can do anything in ornamentation.

I happily create pieces that are influenced by my clients. For example, a couple discovered my work in the museum and contacted me to make their wedding rings. It’s a very beautiful story! I made two wedding rings on which the Cocteau stars are represented on the outside with very slightly different designs on both rings, while there are two different patterns inside the rings. For her, it’s a very feminine motif that we drew together and for him, I worked with the decor of their library. I composed these motives for them, and they will be unique. We synthesize all this in the piece of jewelry that will obviously be worn and will convey a sense of symbolism.

I also make bigger objects, ornaments, object wrapping. For example, I made an adornment on a crystal bottle for Maison Guerlain in limited and numbered series for the exclusive collection of La Petite Robe Noire.

There was a first exhibition. I started to research and collect textile lace patterns in museums in Portugal. The result of this first work is a collection called “The Gold of Time” which has been presented twice in Lisbon.

For the exhibition at Secq Des Tournelles the former curator, Anne-Charlotte Cathelineau, invited me to discover the collections of the Museum and interact with them. I identified objects that resonated with my creations through decor, forms, and technique, and developed this exhibition “Sara Bran The Gold of Secrets“.

Secq Des Tournelles gathers a fantastic collection of objects, including keys and locks. For example, there are some “secret” locks, which are true masterpieces. When elaborating complex locks, the locksmiths engraved inscriptions or motifs on the inside, patterns that are only visible to those who understand the mechanism of locks. It’s quite fascinating and I had the pleasure of meeting these locksmith masters!

It is a true source of inspiration for patterns and constructions. I have identified some strong, major themes that are also present in my collections. It’s interesting because I’m in front of a collection of thousands of objects made by several thousands of artisans, and there is a quest for excellence, recurring themes can be found in small details, like hidden messages.

As a craftsman of excellence, it is completely captivating, it’s as if I met them. There are themes that are dear to my heart, such as flowers, or the theme of hearts that is a conducting line in my work.

When we developed this program with the Museum, I came in residence three times to work on the collections. It was amazing to see the details of some objects, like this sea serpent, the scales, and the feathers of the birds … absolutely wonderful!

This exhibition also includes a drawing cabinet where I present ten years of archives, my personal drawings, my studies, the technical plans of my pieces. Maison Piaget allowed us to present the drawings we worked on together, and there are also many drawings that I made here at the museum, as well as my notes on the pieces of the collections.

I present more than sixty pieces gathered for the exhibition, there are thirteen clip frames, several hundred original drawings, and layers. It’s a beautiful exhibition!

There are emblematic pieces such as the large floral collarAu Coeur de la dentelle Guipure 2010which is a flagship piece, the collar1001 autres Fleurs pour la Paixwhich is a new creation, or the collar Point d’Alençon which was created for the “Secrets of laces” 2013 exhibition at the Alençon Museum.

There are also two pieces created in dialogue with one of the Museum’s works, La Crèche Lanterne. It is an emblematic piece of the museum, unique in the world. Its ornamentation is grandiose because we are in the architecture of the square and there are scrolls everywhere. The exhibition is divided into four chapters, one for each theme.

The first chapter is “The secrets of flowers“, which is an essential theme in art, in this museum, and in my work. Then “The secrets of the depths” shows the shadow and light that are inseparable, and a work on fish from the underwater world that I love, with baroque sea monsters.

Then comes “The secret of hearts” because it’s so important and it’s an ubiquitous motive in my work. Finally, the last chapter is “The secrets of time“, because we cannot escape time … The notion of time is present in each piece, it takes several months to create a single object.

When one can devote several hundred hours to a piece, sometimes it becomes stronger, more intense, it has a soul.

The Manchette aux coeursfeatures 65 diamonds and took several months to create. We are working in the infinitely small with a high level of precision, just like those artisans from past centuries, this is where we meet. Time is an important concept in the world of luxury.

After this exhibition, where do you see yourself ?

I’ll probably be in another museum within two or three years. I always have several projects at once. I have two collaborations this summer including one with a Paris fashion house.  I also have a project with photographers on biodiversity. It is a purely artistic work in dialogue with photographers. Based on their photographs, I will work on paintings with my own techniques. This work is intended to be presented in a gallery.

Over the summer, I will create an association to commit myself to the protection of the environment, to dedicate the excellence of luxury to preservation. For several years already, I have been meeting people who work on the theme of nature with this high level of excellence and who are ready to commit themselves.

When an object is extremely beautiful you can reach people, it opens the dialogue and can raise awareness. All artists and artisans have always been inspired by nature, by the world we will leave to our children. It is essential to convey a message to safeguard the beauty that nature offers us.

Read our interview with Daniel Paillasseur, founder of Maison Korloff