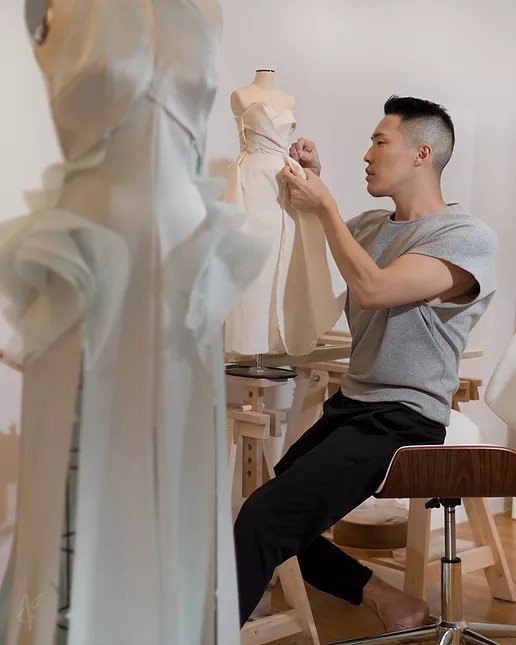 For his first Haute Couture collection, Mihca Cho honors us by sharing his creations, his inspirations and his fantastic experience in fashion with us. Born in the United States, from South-Korean descent, he studied at the prestigious Parson’s School of Design in New York. He lived in the city that never sleeps for 24 years and recently opened a larger workshop in Los Angeles. He worked with one of the greatest fashion geniuses of our time: Alexander McQueen. This collaboration undoubtedly left its mark on Mihca Cho’s creativity. He describes his Haute Couture signature as a “romantic dualism”. We discover a world made of dreams, mythology, traditions and emotions.

Maison Sensey : How did it begin?

Mihca Cho : Haute Couture has always had a special place in my heart. Even though it has strict traditional requirements, it has given me more creative freedom than any other field of the fashion industry. When I was studying at Parson’s School of Design, I had the opportunity to travel to London where I received job offers from Vivienne Westwood and Alexander McQueen, and I chose the latter.

Later, I joined a prêt-à-porter company to further my knowledge of the fashion industry. A few years later, I joined an evening-wear company and later became Senior Designer for the prestigious bridal designer Amsale. At Amsale, I would create six bridal wear collections per season, and I worked on the creation of bespoke wedding dresses for private customers and celebrities.

I gradually developed my atelier while working full time. After work, I would go home and start working on my own creations. In the beginning, I created couture dresses for friends and family, but as I was getting more and more requests, I realized that I wanted to create my own Haute Couture collection. As such, I created my own label Mihca Cho, hoping that I could inspire others to better appreciate quality, craftsmanship and art in fashion.

Could you tell us about your work technique, and the vision you want to express in fashion and Haute Couture?

My work technique is similar to the one used in the film industry, where dramatic visuals are deeply linked to emotional tales. I start each collection by defining a set of concepts and emotions I want to convey. Then, I imagine a matching story and identify the female characters that would best represent it. Only after those steps, I start designing the Haute Couture clothes for each character using high quality fabrics, ornaments and embroideries.

From design to completion, each dress is conceived, modeled, cut and sewn with my own hands. As such, each dress is created with utmost care and can take up to several months to be completed.

You’ve worked with Alexander McQueen, what did you learn from this experience?

Working with Alexander McQueen has been a turning point in my career. Unlike many designers today, he is a master of his craft considering his rare ability to conceive, model, cut and sew his own clothes. I found this ability extremely important for myself as it allows me to correctly conceive and complete dresses that are always more extravagant than the next.

The true genius of McQueen lies in his ability to stir intense emotions with dramatic pieces. His work is intricate, unique, bold and mystifying as it is detached from current trends – all the qualities I strive to reach with my own work.

In the end, it is McQueen who said: “You’ve got to know the rules to break them. That’s what I’m here for, to demolish the rules but to keep the tradition.”

Haute Couture is a very demanding market, which signature do you want to bring?

I think that my signature could be described as “romantic dualism” because I love to compare and oppose traditional, natural, mythological, emotional, dreamlike elements. I am also very attracted to transitional elements such as the movement between stillness and dance or between light and darkness.

Those who like my work embrace the idea of combining art and fashion, and they are not afraid of being different. I tend to avoid reinterpreting the design aesthetics of existing cultures through references to pop culture or by following societal trends because I think that creating my own unique worlds is much more intriguing, significant and less restrictive.

Native to Jordan, the black iris is a delicate-looking flower that manages to blossom in the toughest sand of the desert. As the inspiring theme for my first capsule collection, the black iris represents women who are often depicted as delicate flowers by society yet are able to survive and overcome adversity in their daily lives.

Initially a large collection, it was purposely downsized to five dresses in order to define more clearly the primary feminine characteristics of my atelier. Through those five dresses, I tried to recreate the blossoming of a flower, from a short cocktail dress representing the hard shell of a flower bud to the final dress representing the fully bloomed petals of the black iris. “The Leucite’s Copse” is my first complete Haute Couture collection based on the concept of shelter, past memories and desires.

This collection was created at a time where one of my close friends was mourning her father while she had already lost her mother at a young age. She spent most of her time in retreat, trying to make peace with her pain, seeking shelter. Her mourning eventually inspired my collection. By drawing highlight lines and curved arches, I imagined a collection inspired by cathedral windows and the branches of a copse shining under the moonlight. Her son was the inspiration for the character of the Leucite, a glimmering white deer with golden antlers who watches over the forest.

Do you want to be kept informed of Maison Sensey’s brand new material?
Here is our newsletter.

Our website uses cookies to provide you with the best possible browsing experience. Cookie information is stored in your browser and performs functions such as recognising you when you return to our website and helping our team understand which areas of the site you will find most interesting and useful.

This option must be enabled at all times so that we can save your preferences for cookie settings.

WOOCOMMERCE
Our site uses WooCommerce cookies to support your shopping experience on our shop, handling the standard features of creating an account, adding products to the shopping cart, and making payments.

WPLM
Our website uses WPML. It detects the IP address to evaluate the approximate geographical area, in order to redirect to the French or English version of the site.

Stripe
Stripe is used to making credit card payments. Stripe uses a cookie to remember who you are and to enable the website to process payments without storing any credit card information on its own servers.

If you disable this cookie, we will not be able to save your preferences. This means that each time you visit our site you will have to enable or disable cookies again.

Our site uses Google Analytics to collect anonymous information such as the number of visitors to the site and the most popular pages.

Please enable Strictly Necessary Cookies first so that we can save your preferences!