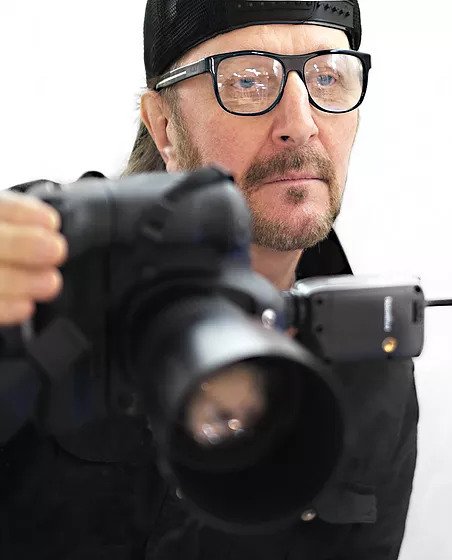 Clive Arrowsmith is associated with the biggest names on the planet: he photographed Mick Jagger, David Bowie, Paul McCartney, His Holiness the Dalaï Lama, Prince Charles, Yves Saint-Laurent and Alain Delon – just to name a few. He also works for Harpers Bazaar and Vogue and made the Pirelli calendar two years in a row. Clive Arrowsmith has also published a book called Fashion, Beauty and Portraits and is about to publish a second one in June on famous British painter L.S Lowry. This man of many talents, who turned to Buddhism thanks to his friend George Harrison, is part of Maison Sensey, and we are very proud of it.

Maison Sensey : How would you describe your work ?

Clive Arrowsmith : I am obsessed with my job. I have a slightly dreamy yet obsessive personality.

How would you define the perfect shot ?

It doesn’t exist. I’m endlessly looking for it, but I will never get it. If one could reach it, there would be no point in carrying on. I can come close to it, but as we never get the perfect shot, we must carry on.

One’s wrinkles reflect their life story. Which portrait holds the most life experience, the most personal history ?

The portrait I made of Michael Caine. The whole story is captured in the picture, this photograph cannot be described, the image tells the story.

Your photographs are very close to painting when it comes to emotions. Does painting influence your work, and if so, how ?

I started by studying painting in an art school for five years before discovering photography, which I had previously described as a minor creative art form. When I began photography, painting gradually ebbed away. But the lights from the Italian Renaissance never left me. I sometimes get called the ‘Caravaggio of photography’, which makes me smile.

You manage to convey the elusive. When you take a portrait, what do you perceive that cannot be seen ?

I think that I perceive some sort of electric energy around the faces of the people I photograph. This energy reveals their passions, their sadness, their joy… When their smile or their laugh disappear, the memory of this moment is captured by the camera. It’s a moment that can never be repeated.

Your next book, Lowry At Home, focuses on L.S Lowry, a famous British painter whom you photographed early in your career. Why this book ?

It is an intimate photo shoot of Lowry in his home in 1966: it depicts the industrial landscape of Salford, near Manchester, where the specter of the industrial revolution was still very much in the air. Lowry is captured in a simple state, in his daily life. He captured the people of his time with so much sympathy in his own work, and it is reflected in the pictures found in the book.

Lowry declared “I paint people as I see them”. Is it true for your too ?

Well, yes, I photograph people as I see them. It may seem obvious, but we can only photograph what’s in front of the camera. However, by playing with lights and shades, we can add a specific atmosphere and dimension that only exists in that moment.

Out of all the people you photographed, who moved you the most, and why ?

As a Buddhist myself, I especially enjoyed taking pictures of my Tibetan Buddhist teacher, Khyongla Rato Rinpoche and His Holiness the Dalaï Lama, because at this occasion time did not even exist anymore. I also enjoy taking pictures of beautiful women because I see them all as goddesses.

Laura Pergolizzi (a.k.a LP), Jeff Bridges, Beyonce, and Christy Turlington whom I never got the chance to photograph – she’s such a classical beauty. Oh god, I could go on and on, my camera is just longing for them.

Which photographer would you recommend to Maison Sensey?

I would recommend venerable photographer Nicky Vreeland – Buddhist monk, grandson of the legendary editor of Vogue magazine Diana Vreeland, and author of the movie “Monk With A Camera”. I would also recommend Brazilian photographer Sebastião Salgado.