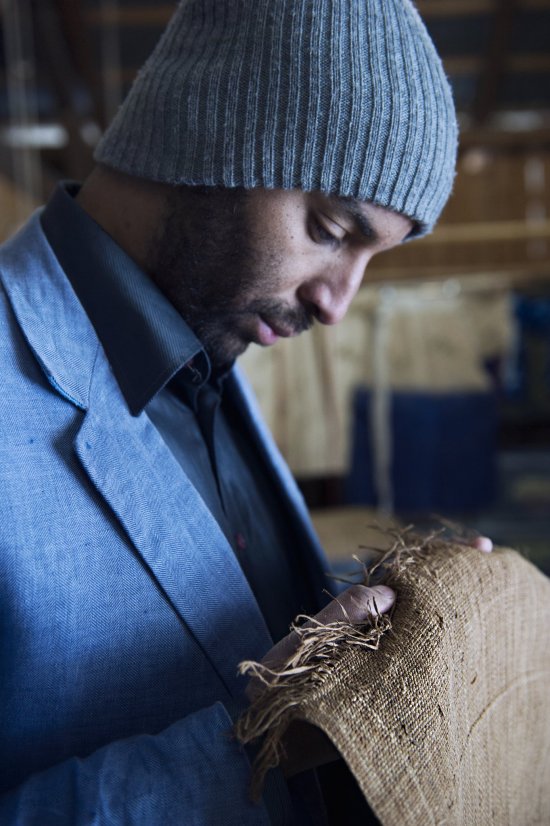 Ali Rakib is a seeker of historical fabrics. His quest takes him to Nepal, to Amazonia, to our planet’s most hostile places where the most beautiful treasures lie, hidden away. It also includes meeting communities who pass on their skills and customs to perpetuate their ancestral knowledge. Ali Rakib is also a lecturer, consultant, ethnologist, businessman, and former recruiter for league 1 and league 2 football. All these roads led him to working in the textile industry, which is only an excuse for his real undertaking: safeguarding intangible cultural heritage. His aim is to start with an anthropological, scientific and ethnographic value to foster creation, and to let artistic value arise from it.

Maison Sensey : How did it begin ?

It started with a realization that hit when I lived with my family in southern Morocco. Each year, I would see one or more of my cousins ​​leaving our little stone houses to go to the city. Once there, they would never return to their roots.

They would forget the Berber language, our customs, our rituals, our dances, our songs, to be reduced to blue jeans and coke. At the time, I travelled a lot for work, and I realized that the same thing was happening all around the world. Young people leave the mountains, the forests, the deserts to go and join slums. They do not find viable situations in the city however. Rather what they find appears to be a social accident.

Considering this observation and my own life situation as a civil servant at the time, stuck in the same daily routine, I decided to do something else. I sold everything I owned, resigned and started traveling to discover the world. I was 27 years old at the time.

Once in Nepal, I worked for Handicap International. My first vacation there, I did what I’ve been doing since the age of 17: I went on a solo survival trip, an annual necessity for my spiritual wellbeing. The first time I did this, I did not do it on purpose. I became lost in the Atlas Mountains where I had to rely upon my survival instincts and discovered a love for the experience. But before leaving, it is important to learn about the ecosystem, the fauna and flora.

I climbed the Annapurna, one of the highest mountains in the world. The higher you climb, the more you leave the tourist track, and the more you get to meet self-sufficient communities. The women take part in active life, older generations pass down their knowledge, there is joy and laughter. They speak a dialect unknown to me. There I discovered so much culture: songs, dances, authentic clothes, with few blue jeans and T-shirts.

And I thought maybe that‘s the model that needs to be replicated. But instead of doing it vertically, maybe it should be replicated horizontally with all the populations of the world, because the advantage of textile is that it is universal. That’s why I decided to create a traditional textile company. That’s how the ‘ForWeavers’ project was born.

With textile as the pretext, the principle of my company is to safeguard intangible heritage because I’m afraid that what I witnessed in my village in Morocco is happening everywhere. In the span of just 50 years, 5000-year-old knowledge and customs disappear. In Rwanda I saw Coca-Cola going further than drinking water, reaching areas where children were dying of thirst. If industries can go thatfar…

Everything is connected to intangible heritage because people can be completely independent. That’s just what I try to maintain. I do not want to freeze traditions, but I want to allow people to have a choice.

How did you end up working in the textile industry ?

I did not want to start a business right away, I wanted to retain some leeway, to be able to change my mind, to change paths as often as possible. My career as an NGO president allowed me this freedom. Six years ago, I created a company called ‘Tashkent’ named after the capital of Uzbekistan, through which part of the Silk Road runs, to test the idea, the product and the market.

I started selling to my network of historical reenactors who I know from my past in experimental archeology. It consists in reconstituting life as it was at a given period. It spans from prehistoric times to the Napoleonic era or the Second World War. There are enthusiasts who go as far as reproducing the exact same fabrics as the ones used at the time down to the last thread. Some people are specialized in forging or woodwork, but no one was specialized in textile.

I have suppliers who can weave fabrics by hand as we did two or three hundred years ago, and I have a market in demand for historical fabrics. I began by weaving historical fabrics in Nepal from Napoleonic fabrics, cashmere that was used as veiling in the fourteenth and fifteenth century, and sails from Christopher Columbus’s time. But it was a niche market, so it did not allow me to secure permanent work at the workshops.

I developed other fabrics in silk, wool, nettle, banana tree, reed, and lotus in more than twenty countries around the world. I wanted to find a way for buyers not to be victims of fair trade, and for producers not to be subjected to the contingencies of customers and to the seasonality of fashion. I wanted a solution that would be viable all year long. That’s why I multiplied production, purchase, and customer sources, which resulted in a coherent project.

How do you look for historical fabrics ?

At first, it worked through intuition and encounters. Now, I have a partnership with UNESCO. They provide me with a lot of scientific and anthropological data on cultural skills that exist, that are endangered, that are classified as UNESCO heritage, or that need to be classified. Thanks to this information, I have a base and several sites to visit. Once there, I let my intuition guide me. I am a material seeker because everything is connected.

This preliminary work with researchers and scientists allows me to prepare for my arrival. Some communities can be visited without prior preparation, others are riskier. You must learn the codes, the gestures, the looks, the way of expressing yourself.

Is history present in fashion today ?

Li Edelkoort wrote an anti-fashion manifesto. She really felt like fashion no longer exists. It can still be resurrected in some ways but today it meets purely mercantile criteria. We no longer have the audacity and the courage to try new things. It can be felt in the great fashion houses. Something is missing at this level.

I see it with purchasers in some countries, they gradually acquire all the knowledge from their children who study in our fashion schools. When will they decide to do without our French expertise ?According to some foreign ministries, it is not possible because French history and imagination are part of our added value. But this is only the word of a few men!

Is our history well used ?

We could do better by considering history itself and not only the creator’s history. It would be interesting to dwell on the skills, the patronage, the trades and the history of fashion itself. Right now, there are plenty of movements in fashion, hopefully they will bear fruit.

What are the most amazing fabrics you have discovered ?

I didn’t bring back the fabrics that surprised me the most. Like this Japanese fabric that I decided to leave behind because its place is in a museum, not on a market. It takes two weeks to weave 8 inches of this fabric. It’s a very meticulous work, the patterns are designed with the utmost precision, with gold thread.

In Amazonia, after an amazing journey, I encountered a community who gave me some orange cotton as a gift. This cotton grows in a 130-foot-tall cotton plant. It is a wild cotton that is naturally orange. But I also left it there. Anthropologists often reason like animal photographers.

Who are your clients ?

There are two categories, fashion and decoration. Fashion customers come to me for the history of the company because they need a story to sell, but they want to buy low-end fabric like cotton or linen. Some of them want rare fabrics, but only for capsule collections.

My best clients are in decoration. They are very professional; they are textile technicians. They are very passionate, hence the event we created with the Arty Road Show. In fashion, I have a more fluid approach in Italy and in England. In France, we stick to winning formulas like cotton and linen, clients do not want to take any risk.

You have just completed a European tour that took you to the prestigious Saint Martin’s School in London, where you gave a lecture, can you tell us more ?

It’s the first time I ever prepared a lecture! I was alongside LVMH and Louis Vuitton for this conference. I wanted to stay myself, so I talked about survival in a hostile environment, anthropology, and relationships with my clients whether they are small creators or great fashion houses – it’s still human encounters above all.

The students were surprised, because just before me, two conferences on sustainable development were held by LVMH and Vuitton, featuring slides with a lot of figures. And I rocked up with my pictures, my story, my project and my approach… they were surprised – and they loved it!

I was pleased because all areas of design were represented and indeed, intangible heritage concerns everyone.